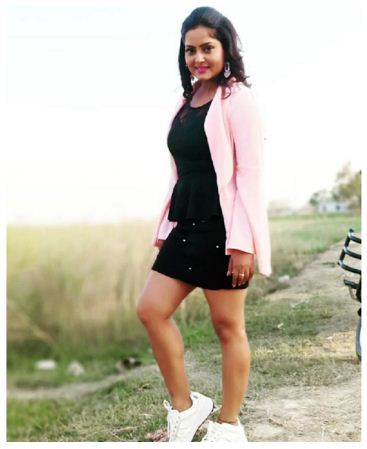 Bhojpuri actress Anjana Singh makes her followers go gaga on the internet with her looks.

Recently, the actress shared her ravishing western look in a short black skirt, peplum top and a pink coat. The picture proved that the Bhojpuri actress looks gorgeous in any attire.
While sharing the picture on Instagram, she wrote, ‘#goodmorning #haveagoodday #keeploving ‘.

On the work front, Anjana has several films in her upcoming list such as ‘Shakti’ opposite Ravi Kishan where she will play the protagonist. She will also be seen in films like ‘Saiyaan Ji Dagabaaz’ and ‘Chor Machaye Shor’.

In ‘Saiyaan Ji Dagabaaz’, Anjana is paired opposite Nirahua. The film is directed by Ajit Shrivastava and produced by Rajesh Radhelal.